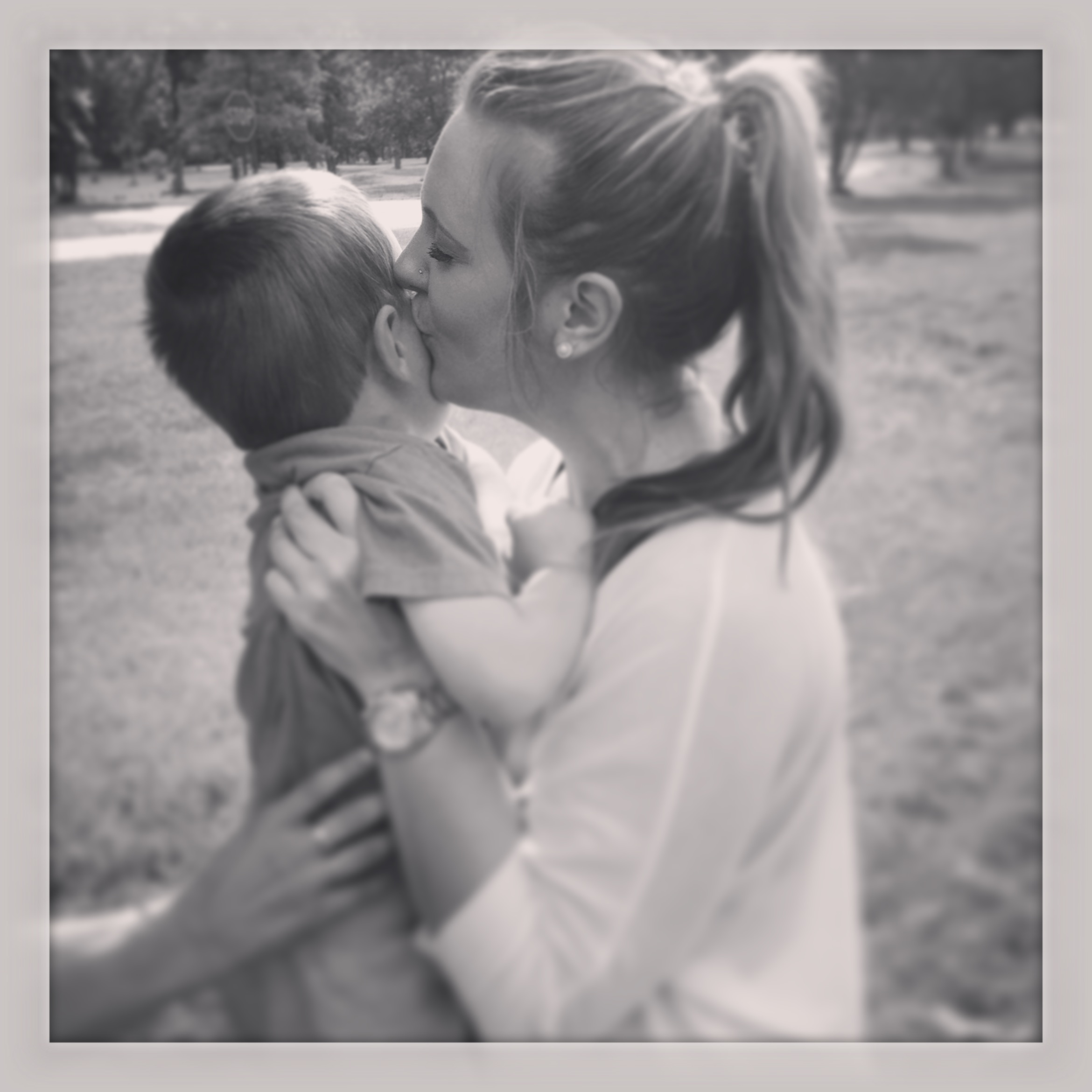 My name is Meagan, and I am a birth mom. In 2010, in my second year of college, I discovered that I was pregnant. I was a teen and in a very new, long-distance relationship. To say I was devastated and confused was an understatement. I was not ready or prepared to raise a child. My boyfriend was in college working hard on his degree too. I felt scared and unprepared. I went to a clinic to hopefully get more information. The women that helped me that day were so incredibly caring and sweet. They confirmed my pregnancy, talked with me, and answered all of my questions. They gave me a bag of pamphlets with information, and I booked an appointment for an ultrasound. I left that office knowing that no matter what I decided, my life had changed forever. I told my family. Some were disappointed. Not everyone, though. I did have a lot of support. I spent some time thinking and decided that I could not terminate my pregnancy. I finished my semester and prepared to take a semester off. I did not want to fall far behind in college, so I signed up for three online classes to take while away from college and pregnant.

Eventually, I met with an adoption agency to get more information. I immediately thought that adoption meant that I would never see my baby again, and that I would be looked down upon for the rest of my life. I knew without a doubt that I wanted to be in my son’s life. I was very worried that there was a chance I wouldn’t get to hear about how he was doing. That’s when my advocate explained to us more about open adoption, and how I would get pictures and letters and visitations. I was pleasantly surprised to learn that 95% adoptions have some openness, and most adoption agencies, including the one I was working with [in New York], actually spent most of their time educating both prospective adoptive parents and expectant parents that open adoption is statistically the healthiest way to make an adoption plan for both sets of parents and, more importantly, for the child. After their reinforcing how important open adoption was, I believed adoption might be the right choice for me.

It wasn’t an overnight decision, but I knew this is what I wanted to do. The agency made me so comfortable and allowed me to make all the decisions on my own and to take as long as I needed. We looked through the family books my advocate gave us, and we picked two families to meet with. We didn’t mesh with the first family, but when we met with the second, it was as close to magic as I can explain. I felt like I had known them forever, I knew that these beautiful people were meant to raise the baby that I was growing inside me. It felt as right as if I planned the whole thing myself. We spent the remainder of my pregnancy getting to know this family better. Each time we left a meeting with them, I felt even better about this decision. They put my feelings above their own Every. Single. Time.

Sometime along the way, I realized that some of my family was sad for me. I remember having to explain to them that I didn’t see this decision as a loss. While I was emotional, I wasn’t overwhelmingly sad. I was excited. Excited to meet my baby, excited to see him grow and see what our unconventional family would look like. I had accepted a long time ago that my life would change, and I wanted it to be for the better. Many people didn’t expect me to feel this way. The day finally came, and after over 20 hours of labor, I got to meet my son.

The few days I spent in the hospital were extremely hard. I don’t think I can put into words how hard it is to prepare to place this perfect baby that you spent 9 months with, with someone else. Yes, I still knew it was the right decision. I have never, to this day, ever doubted that. But actually doing it, ripped at my heart. We met with the family at the agency right from the hospital. I put our baby in his mother’s arms, and it was the most profound moment of my life. We all cried, but we laughed a lot too. They explained to me, and continue to explain to me that I gave them the greatest gift a person could give. The next few days were extremely hard. I was in pain both physically and emotionally. My advocate had me write a pro/con list of parenting vs. adoption months prior, and I leaned on that list, reassuring me this was the right decision. I knew it was true, but the longing you have, wanting to know what your baby is doing seemed instinctual. Every day got better and a few weeks later, I got to meet with them again. It was amazing. I got to hear all about his firsts. When we had to leave, I cried for a long time afterward. But, each visit after that I cried a little less. I always look forward to seeing them. It has been 10 years, and I know this is exactly how my life was supposed to turn out.

I graduated college on time, even after missing a semester and taking summer classes to finish. I continued on to grad school and now have my dream career that I got right out of grad school. I have traveled much of the country, and feel so much more prepared to start a family of my own. I’ve gotten to experience so many incredible moments with him, and I am so grateful his parents include me in so many of their memories. I cannot imagine how either of us, birth or adoptive parents, could manage if we didn’t choose an open adoption. As he has grown up, we have taught him about his adoption journey when questions arise, and in turn, answers and explanations come naturally. He has always known who I and his birth father were. When he was old enough to learn about mommies and daddies, it was explained how I grew him in my belly for his mom and dad because they could not have babies without help. I will never forget one day when he was 7 years old, and he was asking questions, and reiterated in his own words that I grew him in my belly and gave him to his adoptive parents. His mom confirmed that this was right and he said “hmm, that makes Meagan really really special then”. He recognizes how this decision was made with an abundance of love. He knows he was never unwanted or “given away”. He has said on many occasions that he is so lucky to have double the family to love him. I cherish the relationship I have with the parents of my child. My son’s adoptive mother stood next to me at my father’s wake last year, and it was another of the most profound moments of my life. That was them supporting me. Not necessarily for our son but because what we have is an incredible relationship, one I would not have without an open adoption plan. Was this a hard decision to make? Absolutely. But was is the hardest thing I’ve ever done? I may have said yes several years ago but honestly not anymore. In choosing open adoption, I was able to make all the decisions each step of the way and make it work for us. And now it’s a natural part of my life.

Last month, I got to testify in a state senate meeting on the importance of open adoption to ultimately make open adoption agreements possible in Arkansas. If I wasn’t able to have an open adoption with the assurance like I did, I would not have chosen adoption. I would have either made a decision I would have regretted for the rest of my life, or struggled to parent my son. I would not be here today with the life I have been able to make for myself, and he would not be thriving like he is. I am confident in this. I wanted so badly to give other birth mothers who found themselves in similar positions as me the confidence in their decision. On April 22nd, that bill was signed into law, officially making Arkansas an open adoption state, and I was able to attend the signing. This was, yet again, one of the most profound moments of my life. I felt like I had potentially made the decisions of countless scared and unprepared pregnant women, easier. I felt like we empowered women, giving more confidence and normalizing open adoption.

What I hope to accomplish in the future through sharing my story is to continue to give women the confidence to proudly choose adoption, and confidently talk openly about it. I wish I was given more information about adoption at the clinic, at the sonogram appointment, and from each professional I ran into. There are more than just two options when you experience an unplanned pregnancy. I hope to help clinics and professionals become more comfortable talking about adoption and in turn be able to help more women. I think making the topic of adoption seem normal and incorporate it in everyday conversation, and sharing our story can help other women and families have more positive experiences like we did. Thank you so much for sharing and reading my story.